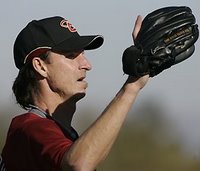 Arizona Diamondbacks pitcher Randy Johnson pitched well in his second rehab outing, striking out seven in six innings. The Diamondbacks plan to bring him back to face the Giants, which is a smart move considering the Giants would put up a good fight against some Triple-A teams right now. Just kidding, but the Giants offense is weak right now and the if the Diamondbacks can build a solid lead for Johnson, it should allow him to get comfortable. If Johnson can come back strong and give the Diamondbacks five to six innings each start, they will be in great shape for the playoffs. Dan Haren and Brandon Webb are solid at the one and two spot, and Micah Owings is both hitting and pitching to help his team. The Diamondbacks are still my team for the division, and they could easily make it to the World Series this year with their young guys more experienced and hungry for the World Series.