Mariners Putz Out Till June?

Share All sharing options for: Mariners Putz Out Till June? 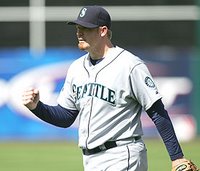 The Mariners placed JJ Putz on the DL because of costochondritis, which is inflammation on cartilage attached to the ribs. You know the Mariners have a good team doctor when he can pinpoint an injury like that. This is a rare injury, and it could require surgery if it does not show signs of improvement. He will probably be on the DL for most of the month, if not two months. One doctor I talked to said one must avoid physical activities and deep breathing, among other things. He went on to say that it could take 4-8 weeks for the inflammation to come down. Am I ready to change my AL West Predictions just yet? No, but this could effect them down the road. I assume Mark Lowe will get the job as closer, but he could share the role with O'Flaherty or Green. Putz went 6-1 last season with a 1.38 ERA and 40 saves, so he will definitely be missed by the much improved Mariners this season. We'll see, this could be very minor and he might miss just the 15 days given to him. But, it is possible he could miss a major portion of the season.