Mets Not Happy With Sosa?

Share All sharing options for: Mets Not Happy With Sosa? 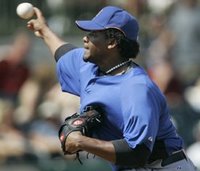 In yesterday's game, Willie Randolph seemed content with the job Jorge Sosa was doing. However, after he gave up the grand slam to Kelly Johnson, it doesn't look so good for Sosa. I believe it takes some time for relievers to get going to start the season, so I wouldn't completely turn on Sosa just yet. He had a great year for the Mets last season, going 9-8 with a 4.47 ERA in 42 games, 14 of them starts. The Mets were shopping Sosa earlier this season and found some interest. One local New York radio station suggested the A's a possible destination, but I talked to an A's executive who said that they are not interested right now. The Tigers would be a good fit though. The Mets would really like to get Marcus Thames in the deal, and I think the Tigers should make the move, mostly because their bullpen really needs his help. He looks like another July trade deadline guy, but something could come up in May or June. As for other teams that may be interested, the Pirates, Mariners, and possible the Twins.