Mulder Hoping To Return By June

Share All sharing options for: Mulder Hoping To Return By June 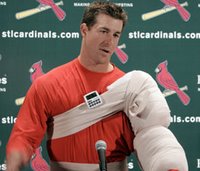 Cardinals pitcher Mark Mulder is set to return to St. Louis for a couple of days and then make somewhere between five and ten minor league starts before the Cardinals consider pulling him off the disabled list: "He's got a long way to go," La Russa said. Mulder, who has gone 6-10 with a 9.71 ERA over the past two seasons, but has had two successful outings in the minors this season. The Cardinals are off to a good start this season and if the can hold on until Mulder, Carpenter, and Clement return, they should be in good shape come August or September. Mulder's cutter and changeup are working really well for him this season, and was throwing the ball consistently in the high 80s. The Cardinals on paper look like an easy team to cross off, but a healthy Mulder behind Adam Wainwright is a scary thought.