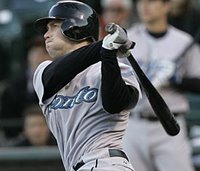 This past Monday, the Blue Jays and 2B Aaron Hill agreed to shut down contract talks till the end of the season. "It was a learning process for both of us," Hill said. I talked with a Blue Jays executive who said talks remained positive the whole time, it was mainly just to get a feel for where they were at. Last season, Hill hit .291 with 17 HR in a 160 games. However, he struck out 102 times while walking just 41 times. You would like to see the strikeouts come down some, and I think it will now that he has more experience. As for terms of a deal, I suspect he will get a deal similar to Mark DeRosa or Orlando Hudson, probably better. The Blue Jays want to lock him up for awhile, and will probably give him a four year deal worth about 20-23 million dollars. That seems fair, considering he really has not established himself just yet. They will probably get this done towards the end of next years off season. GM J.P. Ricciardi has struggled recently in contract talks with free agents, and has a busy off season ahead of him to put him in contention with the Yankees and Red Sox. Still, this deal will get done.

Tigers after Cordero?: According to the Washington Post, the Tigers may have interest in closer Chad Cordero. However, Cordero is likely heading to the DL, making this deal unlikely.

Jose Canseco is lying up a storm: Jose Canseco continues to hype up his latest book with more allegations against Alex Rodriguez. He was right the first time, but I doubt he is right the second time. He just keeps coming up with new stuff.

Phils Helms designated for assignment: The Phillies decided to keep Tim Lahey on their roster, and designated Wes Helms for assignment. This makes room for Rudy Seanez. However, Lahey isn't off the hook yet. He might lose his spot when Lidge comes back. I suspect the Dodgers will pick up Helms as soon as he is available.

Crisp likely heading to Chicago?: According to the Boston Globe, both Chicago teams are showing interest in Crisp. However, I have heard that the Cubs are no longer interested after landing Reed Johnson. The White Sox could use him, but have nothing to really offer.

Alou comes clean about Bartman: Moises Alou came clean yesterday when he told reporters that he would not have caught the ball that change Cubs history forever.