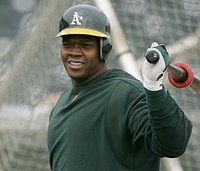 Just two seasons ago, Frank Thomas was the most popular guy in Oakland. He hit .270 with 39 HR and 114 RBI, finishing fourth in the MVP voting before bolting for the Blue Jays. However, now that he is available again, the Athletics are considering bringing him back. Jack Cust is looking more and more like a one hit wonder, so bringing in Thomas to probably platoon with Mike Sweeney makes a lot of sense. Thomas represents a greater homerun threat that either Cust or Sweeney, and will have a bigger presence in the young clubhouse. The one problem I see with this signing is you are potentially blocking Carlos Gonzalez, the A's top prospect, from coming up and getting some at bats. However, if Gonzalez continues to hit well, they will find him some at-bats. If the A's do sign Thomas, they will have to pay him the prorated minimum salary.

Cubs called about Santana: Sorry Cubs fans, but the Cubs did call about Johan Santana but were not called back. It appears that Santana would have been open to it to, making the Cubs the team to beat in the NL. The way they are playing right now though may make people say the Cubs are actually the team to beat.

Hank Steinbrenner, Shhh!: Hank Steinbrenner opened him mouth again and GM Brian Cashman quietly shut him down. He is probably a good business man, but he needs to keep out of the baseball decisions.

Pirates sticking by Morris, for now: The Pirates are sticking by Matt Morris, but if one team is looking for a veteran pitcher for the end of the season, they will probably trade him. The Mets seem like an obvious choice, especially if Martinez stays out and Perez continues to struggle.

Is Ned Colletti On His Way Out?: Andruw Jones has turned out to be a bust, and it is possible they could cut their losses and release or trade him next off season. They will likely trade Juan Pierre before Jones, but it looking more and more clear that Pierre is the more valuable outfielder.

Gagne Out As Closer?: One scout told me that Brewers executives are pushing for Gagne to be moved to a lesser role in the bullpen. This move would likely give the spot to Salomon Torres or David Riske.

A's and Rays Like Gross: The A's and Rays are interested in outfield Gabe Gross now that he appears to be the odd man out in Milwaukee. He will be for sure when Mike Cameron comes back, but the Brewers are already looking to trade him to make room.