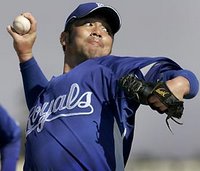 Pitcher Hideo Nomo, who last pitched in the majors in 2005, has joined the Royals bullpen as a reliever. Nomo is 123-109 with a 4.21 ERA in 11 major league seasons, and is hoping he can have success in a reduced role with the Royals. Aside from being healthy, I think the main reason the Royals have him on the team is because of new reliever Yasuhiko Yabuta, who is also from Japan. Nomo has been a very successful pitcher in his career, including an impressive 161-98 with a 3.17 ERA in ten minor league seasons. Not to mention his impressive stats in Japan, Nomo should help their young pitchers as they hopefully can make a run for the playoffs. As of right now, the Royals do have a chance to make the playoffs. The Tigers bullpen continues to give up runs, and veteran pitchers for the Royals were solid in their first outings. I am not going to say they will win the division, but they could surprise a lot of people and compete for third place, which would be a big jump from third worse in the league in 2007.