Peavy's Outing No So Special?

Share All sharing options for: Peavy's Outing No So Special? 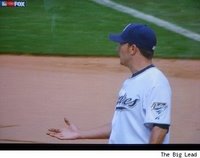 Some attentive fans caught a pine tar looking substance on Jake Peavy's pitching hand during yesterday's game. It is similar to what many of you saw during the 2006 playoffs on Kenny Rogers' hand, but no one can make it out just yet. I don't see ESPN or any of the other stations making a big deal out of this, but it probably would not hurt his reputation anyways. The photo was towards the end of the game, so it was probably a mixture or risen, dirt, and pine tar from the bat. I doubt it was intentional, but he will probably need to close the door on the rumor. MLB cameras have caught a lot of players doing things like this. Manny Corpas of the Rockies was caught dumping Gatorade on his jersey before he went into a game, which would allow his hand to be sticky. Several players have been considered cheaters over the past 100 years or so, but beyond a select few, MLB has not taken any serious action.

After checking the San Diego newspapers one more time, I came across this piece on Peavy. He seems defensive, but I understand why. After a dominating performance, he is already being asked to defend himself about possibly cheating: "I'm not out there cheating. That's the bottom line." Peavy, who is known for not being afraid to throw or threaten hitters, told the Dodgers he is fine with them looking at the balls he throws: "I hope that they're worried about my hand more than they're worried about (my pitches). I honestly hope that's a cause of concern. Anytime Joe wants to have anybody check me, I welcome that." I wouldn't surprise me if Peavy sent the Dodgers a message by putting one in the back of one of their hitters Friday, starting yet another two team feud this season.

UPDATE: Jake Peavy denies that it was pine tar on his hand.