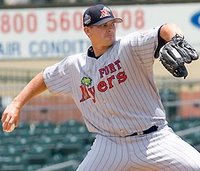 The last five months for pitcher Tim Lahey have been a roller coaster ride. Lahey, who was selected in the Rule V draft from the Twins by the Rays, was then traded to the Cubs. The Cubs were hoping the converted catcher, who has a solid sinker, could make the team as a middle relief pitcher, but he was not able to cut it. "That's part of it," Lahey said. "The longer you're in the game, the more you get used to [uncertainty and constant travel]. Whether you're in the Minor Leagues or the big leagues. One of the only differences I can see, is you're on planes instead of buses. Either way, you're checking in and out of hotels." Many scouts and executives were impressed by Lahey in Spring Training, so he will probably be in the big leagues for the Twins or another team in no time. "He needs more seasoning," one scout said.

The most likely scenario would send Lahey back to the Twins system, but I would not be surprised if his journey continues elsewhere. The Royals are known for giving young relievers a shot, and could use him sparingly throughout the 2008 season. They did successfully with Andrew Sisco, but he soon fell off the radar in the following years. The Mariners lost JJ Putz and could add the big reliever. However, the Mariners have better in-house options that could take the spot. Lahey is not ready to take over in the late innings, so I doubt the Tigers would make a move. I don't see to many teams holding a spot for a reliever like Lahey, so I think the Twins will likely get him back.

If you are a Twins fan, you had to like what you saw from Lahey. To see him pitch well against major leaguers shows that he has a bright future ahead of him.