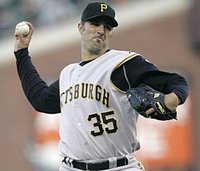 The Pirates announced today that they will release pitcher Matt Morris. Morris, who is set to earn eleven million this year, was off to an 0-4 start with a 9.67 ERA, but couldn't find a way to win: "He's had a great career. He wanted to help us win, and it just wasn't happening." It is unclear whether or not he will retire, but we will know more within the next couple of weeks. Morris is 121-92 with a 3.98 ERA in 307 games with the Cardinals, Giants, and Pirates.

During Spring Training, there was some speculation that the Mets were interested. I doubt they are now, but a team like the Marlins could maybe jump in. He is just thirty-four, so teams could use his services if needed. Other teams that could jump are the Rangers, who look lost on the field, according to scouts. He probably won't be snatched up as fast as Thomas was, but likely within the next month.