Share All sharing options for: Rich Harden Proving Himself Ready 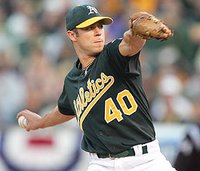 Rich Harden's fast start has excited many organizations who may look to trade for him at the deadline. In two starts this season, he is 1-0 with a 0.82 ERA and 15 K. However, he has walked seven, and you would like to see that come down as the season goes on. If he can stay healthy till the trade deadline, he could likely land the A's a nice package of prospects. The Yankees, who have been scouting the Athletics for over a month, are a possible destination. However, the A's would likely ask for Phil Hughes or Joba Chamberlain, something the Yankees are not interested in doing. If the A's were to ask for three or four low level prospects, or maybe a lesser prospect like Ian Kennedy, they could get it done. I think the Phillies are another possible option, but their minor league system might not be enough for the Athletics. The Cubs, who really need a solid number two starter, have the prospects that could land him, and seem willing to make a trade. Several of their prospects are major league ready, and would do well playing regularly for the Athletics. Dodgers GM Ned Colletti is on the wire after some questionable moves, and he is likely to be in on the talks as well. They have several prospects, and could turn a trade without feeling too much damage. A deal, if any, will go do at the deadline, without a doubt. It is too early to make a trade because his value is not high enough, and he also has not proven to be fully healthy. If a team with a poor bullpen were to trade for him, it would have a negative effect because Harden has failed to pitch over six innings, leaving the team in question for the later innings. If he can build up his arm to get to six or seven innings, the A's will be in a solid trading position come July.