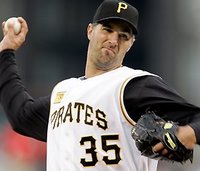 The Rockies are reportedly talking internally about signing pitcher Matt Morris, who got off to an 0-4 start with the Pirates. He has a 9.67 ERA, and from what is sounded like, he was not ready to walk away the way he did. The Rockies and Cardinals have expressed interest before, but it really does not make sense for either team to add him right now. The Pirates, however, are interested in bringing him back in a Front Office role: "Whether it's coaching or whether it's [in the] front office, he would be outstanding," Russell said. "At some point in his life, I think Matt Morris would be an outstanding general manager. He has that knowledge. He has that passion. I see him being able to help in a lot of areas and to be an influence in baseball." Morris was always a smart pitcher, and would probably be very good as a minor league roving instructor. Right now, though, he is spending time with his family.

UPDATE: MORRIS HAS OPTED TO RETIRE.