Should The Rangers Fire Daniels?

Share All sharing options for: Should The Rangers Fire Daniels? 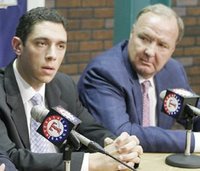 Since Jon Daniels took over in 2005, he has traded away the teams three top prospects in as many years. He first traded 6'11 pitcher Chris Young, Adrian Gonzalez, and Termel Sledge to the Padres for Aki Otsuka and Adam Eaton. Young and Gonzalez are key parts of the Padres playoff chances now while Otsuka and Eaton are no longer with the Rangers. He signed Kevin Millwood to a long deal after he went just 9-11 with a 2.86 ERA with the Indians. Since then (excluding 2008), he is 26-26 with a 4.84 ERA. His K/9 went down in the years leading to the Rangers contract as the H/9 went up, a sign that the signing was not worth it.

That offseason, he also traded top prospect John Danks, Jacob Rasner, and Nick Massett to the White Sox for Brandon McCarthy and a prospect. Danks is in for a breakout year for the White Sox while Brandon McCarthy is on the 60-day DL. His inflated stats could explain the arm problems, but trading three solid prospects for an unproven pitcher does not. In 2007, he traded Mark Teixeira and Ron Mahay to the Braves for top prospects Jarrod Saltalamachhia and Elvis Andrus, among others. This somewhat justifies his ability to make a trade, but one this past offseason does not.

This past offseason, in an attempt to rebuild the outfield, he traded Edison Volquez for Josh Hamilton. Hamilton is off to a good start, but no where close to the same start Volquez is having. Volquez is shining in the bottom end of that rotation and will likely follow behind Johnny Cueto for the next several years to come. While this team could be riding high on the top of the division, or at least competing for it, they have traded away nearly every prospect they have, and are behind the Athletics in terms of development. 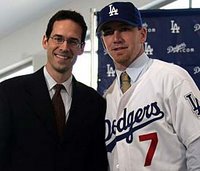 Daniels is young, and he has time to learn, but I think it is time to go with someone more experienced so they can build this team back to greatness. A possible option is Paul DePodesta, who is currently working with Kevin Towers and the Padres. Towers is a master-crafter of trades, and understands stats very well, in my opinion. DePodesta is also a former GM, and built the Dodgers to what they are now. Moving Daniels into a reduced role could open the spot for him later or with another team in the future.