Smoltz Back As Closer?

Share All sharing options for: Smoltz Back As Closer? 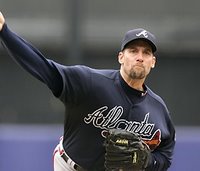 John Smoltz landed on the DL and said that he would be willing to go back to the bullpen when he returns. That is a smart move by a smart pitcher, who is saving his arm from falling off in the rotation to helping his team from the bullpen. Smoltz is an experienced closer, having logged 154 saves in four seasons. Manny Acosta is doing a pretty good right now for the Braves, but would probably be moved to a set up role if Smoltz was serious about being a closer again. His velocity is still good, and he still has good movement on his pitches. The only problem with the move is who will be the fifth starter? Jo-Jo Reyes? Reyes has been fairly inconsistent in the majors but has a 1.16 ERA in Triple-A right now. Maybe giving him the opportunity to pitch every five days will improve his numbers.