Share All sharing options for: A's Sweeney To Twins? 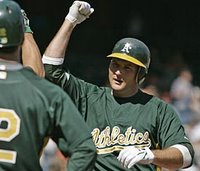 According to a well placed source, one of the teams in on the Frank Thomas sweepstakes was the Twins. Thomas instead decided to sign with the A's, making Jack Cust and Mike Sweeney expendable. But because Cust can also play positions on the field, it would make sense that they would dump Sweeney to make room for someone else on the roster. In 18 games this season, Sweeney is hitting .322 with 1 HR and 7 RBI, so it looks like he has the potential to still hit for a respectable average. The Twins will likely demote Carlos Gomez and could use an extra bat on the bench who can also play three to five days a week. With Frank Thomas in Oakland, it would make sense for the A's to release or trade Sweeney. I have talked with several A's executives and both seem to have a grasp of what is going on. In the end, they will make the right decision.

A couple of the teams in on Thomas, the Twins and Rangers, could go after Mike Piazza, who is still working out looking for a job. He probably isn't the best option, but playing in their stadiums would allow him to put up good numbers. Other than that, Barry Bonds is still available.