Share All sharing options for: Teams Smart To Walk Pujols 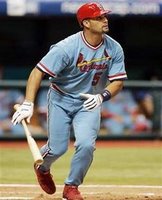 Albert Pujols is the best hitter in the National League, if not all of baseball. Pujols has had at least thirty-two homeruns in each of the past seven seasons and has never hit below .314. For awhile, he had solid protection in the lineup, which kept his walk totals pretty low for a power hitter. But now, teams are starting to realize that he does not have any protection and walking him will likely not come back to haunt them. He has already walked twenty-times this season and admitted yesterday that he is so frustrated that he struck out to avoid a walk: "I felt I didn't want to walk, and I took myself out of the strike zone to swing at that pitch," Pujols said. "The 3-0 pitch was a little low. But I tried to push too much. I should've taken my walk. It's something you learn. You press. It's the way the game goes."

Not all his walks are intentional though. Most pitchers are trying to 'kiss' the corner to limit the damage he can do. Now Orioles pitcher Rocky Cherry told me about his experience facing Pujols when he was with the Cubs: "I felt like there was no weakness to exploit. So I just hoped to throw a good pitch that he would hit at somebody." If you go back to my post, Two Reasons Not To Draft Pujols, you can see that I already talked about this. Pujols is currently on pace for 154 walks, and if the Cardinals do not find a big hitter to put behind him, it looks like he will reach that easily.