Tigers Will Breakout Eventually, But...

Share All sharing options for: Tigers Will Breakout Eventually, But... 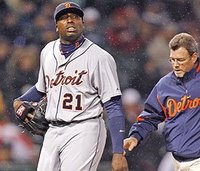 The Tigers intense, but quiet manager finally lost his cool last night, ripping his team apart behind close doors. This was after they were shutout by the White Sox, who hit two grand slams off them in the same game. No one would be saying anything right now if we were in May and the Tigers had twenty-five wins. People would be calling it a rough patch. However, we are just twelve games into the season and the Tigers have just won two games. Their bullpen is worse than everyone expected, and their two biggest additions are vastly under producing.

The Tigers have already been shut out more than they were last season, and are averaging two less runs than last season. Not only that, but their pitching is giving up an average 6.5 runs a game, leading the league by a point and a half. An interesting fact from John Donovan: "Since their 0-7 start the Tigers (2-10) actually have lost a half-game in the standings. If they are to win 92 games they have to go 90-60 the rest of the way. That's a .600 clip. By the way, it has taken an average of 97 wins over the last three seasons to win the vastly improved AL Central." Are you changing your projections yet?

One possibility is that the Tigers hitters are feeling the pressure of being the team that breaks the hitting records, and are swinging at the wrong pitches. Another possibility is that the seven starters 32 years or older are starting to wear down and the others, Miguel Cabrera and Curtis Granderson, cannot pick it up. MagglioOrdonez, who is a career .311 hitter, is hitting just .234 while he is nearly two full points under his career OPS average. Placido Polanco, who hit .341 last season, is hitting just .154 while his career OBP is down a little over a point. His OPS is also down three points from his career average as well.

What can the Tigers do? One option would be to allow time for Gary Sheffield to heal and sign Barry Bonds. He might be willing to take a low base salary contract, and he could turn out to actually help the Tigers. Although Dave Dombrowski said he would not sign him, he might consider if the losing continues. I am really surprised the Tigers did not snatch up either Bryan Corey or Kyle Snyder, but I am even more surprised they have not made a move for their bullpen. Last season, Lou Piniella went off on an umpire to move the attention away from his players and onto him. The team went 63-46 from that point and won the division by two games. Maybe Jim Leyland should do something to take the attention off his players for a couple games, I'm sure an experienced manager like him could handle the heat.

The main point here is that the Tigers are not out of it, but they have a long way to go if they want to win the division this season. As of right now, it looks like the Indians and White Sox will be battling it out for the division, not like the Tigers and the Indians like everyone thought.