Share All sharing options for: Twins Won't Send Gomez Down 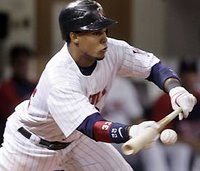 Carlos Gomez is struggling at the MLB level, batting .230 with 0 HR, 5 RBI, and 9 SB. He is frustrated with how he is playing leading to reckless swings and more strikeouts: "We have to get back to contact. It's not a bad thing for a young fella to take a breather. This is a good time. The other young man needs to get in there." Gomez was a key part of the deal for Johan Santana because Gomez was the only one that was major league ready. He doesn't seem major league ready though, and sending him down to Triple-A to find his swing and get his confidence up would do him well.

They have Denard Span who could play in his place, or they could make a move for Kenny Lofton, who could fill the void till the trade deadline before they pull off a trade. The Twins are not going to be much of contenders in the AL Central for the next couple of years, but in order to become one again, they should preserve whatever young players they have. That would mean sending Gomez down so he can return a successful player like the scouts believe he can be.