Would The Padres Trade Hoffman?

Share All sharing options for: Would The Padres Trade Hoffman? 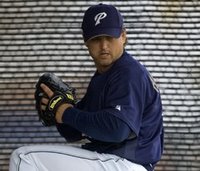 Padres closer Trevor Hoffman, 40, is off to a slow start this season and is already 0-2 with a 12.27 ERA. Yes he has two saves, but all his stats are higher than normal: BB/9, H/9, K/9. It could be a sign that he is starting to fade, or it could be that he just has not gotten over the blown save from last season against the Rockies. Hoffman is a leader among the pitchers and has been a Padre since 1993. I think the Padres would really have to consider if they want to trade him, but it probably makes it easier for the Padres seeing that Heath Bell is picking up right where he left out. In four games this season, he has not given up a run and has only walked one batter. I think the Padres will have trouble trading him if he continues to struggle, or lands himself on the DL, but I am sure there would be interest from a team looking for a solid late inning reliever for a season or two. The Tigers and Nationals stand out as favorites, mostly because both bullpens are depleted and they need a late inning reliever. The Nationals have a deeper system, but the Padres have a better chance to trade him there because he has a full no trade clause. It is hard to say now where he could go because we are only in the second week of the season, but we could see him traded if his stats turn around in June or early July.

Looking towards 2009, many expect Hoffman to retire after this season, so to trade for him if you are not in the playoff run or in desperate need of a closer, would not make sense. Looking at the situation now, it is likely he will remain a Padre.