Would The Rockies Pursue Harden?

Share All sharing options for: Would The Rockies Pursue Harden? 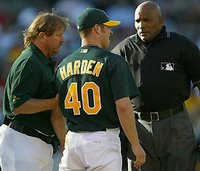 The Rockies goal this past offseason was to lock up their young players, and then land a big name starter. They failed to land a big name starter and are reportedly still looking to accomplish that goal. The Athletics love minor league depth and could turn to the Rockies in July to see if they are interested in parting with a few of their prospects for Joe Blanton or Rich Harden. If Jayson Nix continues to struggle though, they could go after Mark Ellis, who is set to be a free agent. Although he is getting older, he would probably do very well in Colorado. Harden has been hit with injuries, but no one is denying that he could be the best pitcher in the game if he was healthy: "I mean, he could be that guy who, honestly, could pitch 200 innings and give up 100 hits. It's that kind of silly stat that you could see out of this guy," Mark Mulder said. Harden is 1-0 with a 0.82 ERA this season, but is currently on the DL. If he can come off the DL before mid-May and pitch strong till the All-Star break, his trade value should still be high. Other teams that are known to be interested in the twenty-six year old include the Yankees, Cubs, and Indians, among others.