Share All sharing options for: Brewers Looking For Pitching? 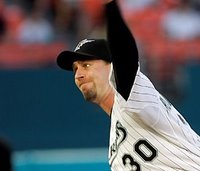 The beauty of having pitching depth is that when someone goes down, you have more to back it up. However, the Brewers lost both Yovani Gallardo and Chris Capuano, limiting their options. It is unfortunate because their offense is such a force in the league, but teams win on pitching. According to the Milwaukee Journal Sentinal, the Brewers have room in their payroll to add another pitcher, opening up speculation to who that could be.

Ben Sheets is going to be a free agent at the end of this season and I think they would be smart to lock him up. Unless they are going to open the bank on CC Sabathia, there really aren't too many other pitchers that could step up and be their ace. Here are a couple options for the Brewers to look at this trade deadline:

Don't forget, the Brewers do have Jeff Weaver in Triple-A, so he could help them out if he can continues to be consistent. He is familiar with the NL Central, so that is a definite possibility.