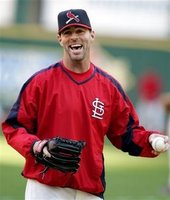 According to the Chicago Tribune, the Cubs have some interest in Jim Edmonds, mostly because lefty Felix Pie has had no affect on the offense of the team. Cubs officials did not shoot down the report, making this seem like legitimate possibility.

The Cubs should let Felix Pie just play through this. Every young player needs to get through the growing pains, especially a player that was signed at an early age. Edmonds, although experienced in the NL Central, would hurt the teams defense and would probably have no major affect on the team. They are better off giving Micah Hoffpauir a shot.