Has Smoltz Thrown His Last Pitch?

Share All sharing options for: Has Smoltz Thrown His Last Pitch? 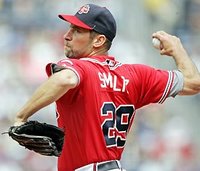 John Smoltz was closing in on a return from the disabled list but faced another setback that could lead to surgery. Smoltz faced the setback in his Thursday bullpen session when he reported discomfort in his throwing shoulder. The discomfort was still there Saturday during his next session, and it is likely the Braves will shut him down indefinitely. Smoltz said he could return as early as next week, or as late as next season, if he pitches: "It could be anywhere between the [late May] timetable I discussed and a lot longer."

This brings up the possibility that John Smoltz may never throw another pitch in the major leagues again. Smoltz has dealt with shoulder problems periodically throughout his career, but has always had time to come back successfully. With time not in his favor, the future Hall of Famer might have to hang it up.