Hernandez On The Block?

Share All sharing options for: Hernandez On The Block? 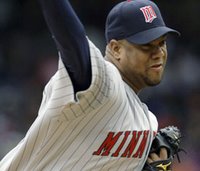 Livan Hernandez has earned the reputation as a work horse, having pitched in at least 200 innings over the last ten seasons. Not to mention that he is very consistent in the playoffs as well. He couldn't find too much interest during the offseason but landed with the Twins for modest five million dollars. So far, he is earning every penny. Hernandez is 6-2 with a 4.22 ERA in eleven games, and will likely be traded if the Twins fall out of contention. Hernandez has proved that he can pitch early on, but always improves as the season goes on. A team in playoff contention that has a solid young prospect to spare may bite on Hernandez for that final push.

Hernandez would definitely help an NL team more than an AL team, mostly because of his ability to keep a lower ERA in the NL. A team like the Astros, whose pitching is okay now but could use a push for the end of the season, would be a good fit. The Phillies pitching is weaker than expected and they could use a push to compete in the second half of the season. Cubs manager Lou Piniella is not happy with Jason Marquis and may push upper management to get a solid innings eater like Hernandez for the second half. All three teams make a lot of sense, and I expect Hernandez to be traded by the All-Star game to help the Twins offense for this season and beyond.