Share All sharing options for: Hudson Likely To Hit Market 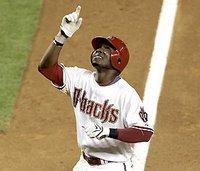 According to Ken Rosenthal, Orlando Hudson will likely soar out of the Diamondbacks price range this off season. Second base is the easiest position to fill on the field and with Chris Burke as a back up and prospect Emilio Bonifacio tearing it up in Triple-A, it makes sense that those two would replace him. Hudson has been great since coming over to the NL, setting career high's in every category. He is batting .272 with 3 HR so far this season but his reported asking price is believed to be around fifteen million dollars.

Ken Rosenthal points out that Orlando Hudson would be a good fit for the Cubs if they are unable to land Brian Roberts. That would put Mark DeRosa, Mike Fontenot, and Ronny Cedeno in limbo though, something the Cubs don't want to do. Fontenot has pretty good power for his size, and looks like he needs an opportunity to shine. If Theriot struggles, Cedeno, who has a better idea of the strike zone this season, could take over. The impending sale of the Cubs could halt a deal as well. The Dodgers, who plan to cut ties with Jeff Kent next season, also make sense. Locking up Rafael Furcal remains a priority though. The Cardinals and Mariners are also possibilities.