Share All sharing options for: Interview with Ian Stewart 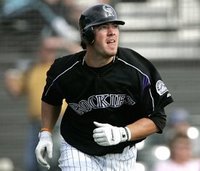 On Saturday, I had the opportunity to talk with Rockies prospect Ian Stewart. Stewart is currently a third baseman in the Rockies system, but is showing promise as their third baseman of the future. He has great power which should improve up in Coors Field, and we should get another opportunity to see him up with Colorado this season. I want to thank him again for doing this interview for me, I really appreciate it. I also want to thank everyone at the Colorado Sky Sox, I appreciate it as well.

ELI: Being in high school, can you tell me a little bit about what was going through your mind as the draft was coming up?

IAN: I started thinking about the draft some as it got closer, but I didn't let it get to me. I played well enough so when I got a call from my agent that the Rockies were interested, I thought that they might take me with their first pick, which was pretty cool.

ELI: As you progress through the levels, you face better pitchers more frequently. How did you improve your game to be able to compete with those guys once you got to Double and Triple-A?

IAN: I think it is something you adjust to naturally. Of course you have to make adjustments to improve you game, but I think you figure it out as you move forward. I talked with our hitting coaches about the approach pitchers take at the higher levels, what to look for in certain counts, and other things like that. But I really think you adjust naturally to those things.

ELI: What was it like to get the call up to the big leagues? Can you tell me how you found out?

IAN: I found out around midnight at my apartment with my wife. I got a call from my manager and he was really excited for me and I was really excited too. I called my family, friends, everybody. The next morning I drove up to Denver and I was in the starting lineup, it was great.

ELI: Your first hit came off of Kerry Wood. Can you tell me what you were thinking when you came up to bat?

IAN: I have no idea what I was thinking. I was caught up in the moment, there was so much adrenaline. Cubs fans draw the best on the road. There were about 40,000 fans at the game, and I would say half were Cubs fans. It was really cool.

ELI: Not two weeks later, your first homerun, a grand slam, came. What was that like?

IAN: That was unbelievable. I'm not sure what inning it was or what the score was, but it was close. I was just trying to get a run in, but I made pretty good contact. At first, I was thinking, 'Sac Fly.' But it kept going so I was like, "Double." But the outfielder kept going back and it got out. It was great.

ELI: Playing in Colorado, what do coaches tell you to do to avoid altitude sickness after returning from a long road trip?

IAN: Nothing really. Were not gone long enough to really have a problem. Maybe a headache here or there, but it isn't bad. Conditioning is hard though. You get winded much easier in Colorado than other places, that is an adjustment.

ELI: You played in the Futures Game last year. What was that like to be playing with the best young players in baseball?

IAN: It was nice -- a good feeling. I didn't have a great season the year before so some were thinking that I topped off, but it was reassuring for me to be included in it. The game was great, it was my first time playing in a major league stadium.

ELI: This past spring training you tried out second base, what did you notice about the position that were hard to adjust to?

IAN: Probably regular ground balls. At third base, nearly every ball is hit hard. At second, most plays are pretty routine. I had trouble with getting around the ball, adjusting my feet, taking my time. It was something I just wasn't used to.

ELI: You are known for being very fan friendly. Signing autographs, taking pictures, etc. Is there an experience from your childhood with a professional player that made you like that or is it something you enjoy doing?

IAN: It is nice to get an autograph as a kid. When I was a kid, I would go over to a friends house and we would write letters to players asking for an autograph card or batting glove, and every once and a while we would get a response. It makes kids happy, I'm not sure why, but it means something to them.

ELI: If you had the opportunity to meet one major leaguer, from the past or present, who would it be?

IAN: Probably Ted Williams. He was such a great hitter. I would like to see the drills he did because his numbers speak for themselves. A present day player would probably be A-Rod or Griffey. I was big fans of them in high school when they were with the Mariners.