Share All sharing options for: Interview with Mark Reynolds 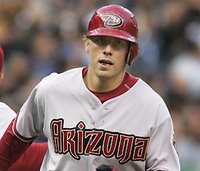 Earlier this week, I had the pleasure to talk with Diamondbacks third baseman Mark Reynolds. Reynolds propelled the Diamondbacks pass the Cubs in last years playoffs, and was a key member of the team all the season. The Diamondbacks have had trouble find a third baseman and finally have one that could be there for the next decade. I want to thank him for donating his time for doing this interview, I really appreciate it. I also want to thank everyone over at Beverly Hills Sports Council for getting this done for me, I really appreciate it as well.

ELI: Coming into the draft, did you think you were going to be taken? Where?

MARK: I had a pretty good feeling I was going to be drafted, I just didn't know where. I was told anywhere between the third and tenth round. I was taken a little later, but it was good enough.

ELI: You jumped right into professional ball after being drafted, was there any adjustment period for you?

MARK: Yeah, but it wasn't baseball related. I didn't have trouble with the wooden bats because I had played in summer leagues -- I think it was more of the lifestyle. I lived on the East Coast and went out to the West Coast, where I had never been before. It is apart of the game though.

ELI: You made the jump from Double-A to the MLB, was there any adjustment period then?

MARK: Yeah, but it was probably everything off the field. Getting use to the media, the crowd, the traveling, the stadiums -- you have to adjust to the lifestyle of a professional. Don't get me wrong, it was great to get the call up -- it has been my dream since I was a kid.

ELI: You played baseball in Virginia with several current major leaguers: B.J. Upton, Ryan Zimmerman, David Wright. What was it like growing up with those guys?

MARK: It was great. Me, Dave [Wright], Zim [Ryan Zimmerman], and B.J. [Upton] all played together on travel teams for years. I have known B.J. [Upton] since I was ten years old.

ELI: Wow. How good were you guys?

MARK: [Laughs] I don't remember losing too much. But it was great to play at the level with such good players. It really pushed me to get better, and that is one of the reasons I am where I am today.

ELI: Coming into Game 1 of the playoffs, were you nervous at all?

MARK: There were definitely some butterflies before the game. It was a great atmosphere though -- hopefully, we will be there many more times.

ELI: Can you take me through the at-bat against Carlos Marmol where you hit that big homerun?

MARK: He has excellent stuff. I was looking for my pitch to hit, like I do every at-bat. I faced him earlier in the season at Wrigley and knew once he got ahead, it was all sliders. I sat back on a 2-1 count, looking fastball, and got a hold of one.

ELI: After the season ended, was there anything you tried to work on in the off season?

MARK: I was just trying to be the best player I can be.

ELI: How has Dan Haren adjusted to the clubhouse in Arizona?

MARK: We have a pretty lose clubhouse. He is real quiet. We've gotten him to open up over the past couple weeks though.

ELI: Do you have a favorite place to go to on the road?

MARK: Probably D.C. or Cinci. I have family in Kentucky and Maryland so I'll get to see my family -- see my dog.

ELI: Who is the most talkative guy in the clubhouse?

MARK: Orlando Hudson. He won't stop calling you a rookie until you are three or four years into the league. He'll pick you up when your down, but he is usually all over the field giving guys crap. He's a good teammate.

ELI: What would you say was your welcome to the MLB moment?

MARK: Probably walking into the clubhouse after being called up. I got there around four o'clock, saw Randy Johnson, Orlando -- I walked over to the board and saw that I was starting that night. That was a great moment.