Is Mauer A Better 'Jason Kendall'?

Share All sharing options for: Is Mauer A Better 'Jason Kendall'? 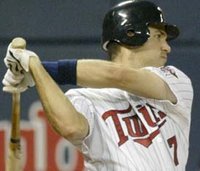 Twins catcher Joe Mauer was considered the top catcher in baseball in 2006 after hitting .316 with 28 HR and a .390 OBP in 306 games. However, he is starting to settle around the .300 mark and averaging anywhere between 7 and 10 homeruns. Mauer is currently hitting .316 with 0 HR in 38 games, but is not doing bad for the Twins. He has nine doubles and eighteen walks, so he is getting on base and scoring runs, in turn, helping the team win. Jason Kendall got his MLB career off to a similar start, and hit 3-6 homeruns over a span of four or five seasons. In his first three seasons, Kendall hit .307 with 23 HR and a .390 0BP, so you can see how similar they really are.

Mauer is much better than Kendall, but it is very possible that Mauer will become a leadoff type hitter hitting .300 with 3-6 homeruns like Kendall has. It is early and Mauer could easily breakout, but the Twins might have made a big investment to a future leadoff man who will add little offensive help for the Twins. If I were GM Bill Smith, I would definitely look to add a power hitting outfielder or corner infielder next offseason to provide protection for Justin Morneau, because it is likely that the Twins will try Mauer in different spots in the lineup.