Share All sharing options for: Is Teixeira Yankee Bound? 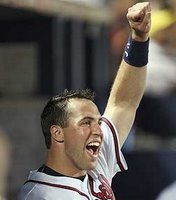 Mark Teixeira is starting to heat up for the Braves hitting .258 with 4 HR and 18 RBI. If he can put up similar numbers to last year, he will definitely be seeking a Miguel Cabrera like deal. That puts the Braves out of it right there, unless GM Frank Wren can convince ownership to hand over that kind of cash. Don't rule them out yet though. The Braves have several young players with modest salaries that help the payroll in two or three years. If the Braves were to give him 17-19 million dollars annually, they could pay him 10-12 million the first year or so, and then raise it so it works into their payroll over the next several seasons. However, it looks as if the Mets, Yankees, and Orioles will be gunning for him next off season. The Mets will let Carlos Delgado walk as will the Yankees with Jason Giambi, and the Orioles will hope he would look to return home with the Orioles. All three are possible, so whoever is willing to pay up will probably get him. My money is on the Mets, mostly because he will be staying in the same division, where he already has success.