Share All sharing options for: Long Term Deal For Hamilton? 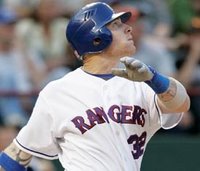 Rangers outfielder Josh Hamilton is off to the best start of his young career and may have a long term deal in his future. Hamilton, 27, is batting .335 with 12 HR and 53 RBI in 48 games this season, but does not even have two years of major league service time. He was taken in the Rule 5 Draft by the Cubs before the 2007 season, but was traded to the Reds. You would think that Hamilton would be excited about the possibility of earning that big contract, he is just happy to be alive, healthy, and helping the Rangers win: "I feel like I'm where I'm supposed to be. I feel like I mix well with these guys and have felt that way since the first day at spring training. Since I started playing baseball, this is the most comfortable I've ever felt."

Hamilton is probably looking at a four or five year deal worth 12-16 million dollars, at most. Although he has played well over his MLB career, he is a lot older than most of these guys getting long term deals.

Here are a couple other guys that should have long term deals in their future: