Mark Ellis To The White Sox?

Share All sharing options for: Mark Ellis To The White Sox? 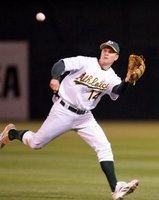 In thirty-eight games so far this season, White Sox second baseman Juan Uribe is hitting just .198 with 3 HR and an OBP of .262. The White Sox have shopped him to several teams, but no one is willing to pick up the majority of his five million dollar salary. Back up Alexei Ramirez isn't hitting much better, so they cannot play him, making a move likely for the first place White Sox. The Chicago Sun-Times reported this past off season that the White Sox had interest in Brian Roberts, but the Orioles high asking price pushed them away. If the Sox are still in first by the All-Star game, don't be surprised if they make a move for a second baseman, especially if Uribe is still struggling. Several teams have not been afraid to dump big salaries, and that could be the case with Uribe this season.

The White Sox probably would not make a push for Dan Uggla, but they could go after Mark Ellis of the Athletics. Ellis is notoriously a slow starter and picks it up towards the end of the season. Although he could be a free agent after this season, bringing him in for the final push makes sense for the White Sox, who could easily surprise everyone again like they did in 2005. Although they surrendered three prospects to the A's earlier this off season, trading a pair of prospects wouldn't hurt their depleted farm system too much anyways.

Speaking of the farm system, the White Sox have taken big steps in Latin America and are looking to be big players come the International signing date in July. This hopefully would jump start their minor league system.