Share All sharing options for: Mets Looking To Make Move? 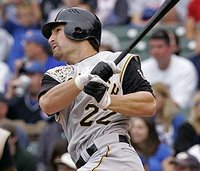 According to the Philadelphia Daily News, Mets GM Omar Minaya is looking to acquire an outfielder or first baseman. The paper mentions Jason Bay, Kevin Millar, and Xavier Nady as possibilities. The Mets were in serious discussions a couple of months ago about Nady, so he makes the most sense. He is a former Met, and would fit nicely in both left and right field. Not only that, but Nady is hitting .321 with 9 HR in 52 games this season and is not a free agent until 2010. As for Bay, he would cost the Mets more players and more money in the long run, so they would probably look at him as a last resort. He is also drawing interest from the Indians and Padres, so the Pirates would be smart to look to those teams first because they are definitely more desperate than the Mets right now.

Millar looks like a late season pick up, if at all, for the Mets. He is hitting .241 with 8 HR in 52 games, which isn't that much better than Delgado. The Mets definitely need a corner outfielder, and I think Nady would make all the difference for the Mets