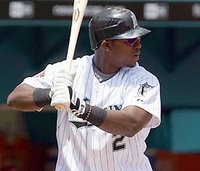 According to MLB.com, the Marlins and Hanley Ramirez have reached a tentative agreement worth seventy million dollars over the next six years. This is a great deal for the Marlins because Ramirez is an excellent player at the age of 24 and doesn't plan on slowing down for the next decade. He brings speed, power, and consistency to the Marlins lineup -- something they haven't had in awhile. Ramirez would have probably been looking at Carlos Lee money, maybe even Vernon Wells money on the market, so this deal already looks good. So far this season, he is hitting .336 with 8 HR in 35 games, but is a career .314 hitter with 54 HR in 349 games. If you are the Red Sox, you cannot necessarily be upset you gave this guy up because you acquired two key players in their 2007 World Series run, but I'm sure they would like him now with Julio Lugo struggling.

Although they went to the bank with Ramirez, I doubt they will do the same with any of their other players. Maybe Scott Olsen, but he is still under contract for awhile. Dan Uggla looks gone with Robert Andino and Chris Coghlan both playing well, but other than that, it looks like they will stay the same. If Jeremy Hermida can prove that he can stay healthy, maybe they would offer him a multi year contract.