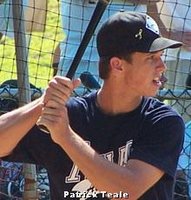 I have been hesitant to get to work on a Mock Draft, mostly because it is early and so much will change between now and June 5th, but I decided to get to work on it anyways. Here is a look at what I think will go down on June 5th:

1) Tampa Bay Rays -- Buster Posey, C
- It has come out in recent weeks that the Rays are very high on Buster Posey. The Rays have been weak at the catcher position and Posey is a good catcher with a great eye at the plate. I expect him to spend some time in the minors to gain more experience, but he should be a pretty good catcher for them.

2) Pittsburgh Pirates -- Tim Beckham, SS
- The best shortstop in the draft, Beckham has been compared to the Upton brothers in high school. Taking a chance on Beckham from high school will be cheaper than some of the other hitters, and it could turn out even better for the Pirates than other teams because of his upside.

3) Kansas City Royals -- Brian Matusz, LHP
- The Royals are not afraid to hand out big money, so don't rule out Alvarez or Hosmer, but Matsuz is the best lefty in the draft and is expected to rise fast. He is very high on draft boards right now and would be hard to pass up.

4) Baltimore Orioles -- Pedro Alvarez, 3B
- The Orioles are not afraid to hand out big money either. They drafted Matt Weiters in the last draft, which makes me think they might go with pitching. If that is the case, I see them taking Aaron Crow. If my mock draft comes true, it would be hard for the Orioles to pass up on Alvarez, who was ranked number one before the start of the season.

5) San Francisco Giants -- Aaron Crow, RHP
- Crow has electric stuff and has put together great outings in college, including a scoreless inning streak of over forty innings. The Giants need help, and it would be hard to pass up on this guy if he drops to five.

6) Florida Marlins -- Tim Melville, RHP
- The Marlins really like to take chances on good high school players, and Melville is that guy. He is a hard throwing right hander with an advanced second pitch for his age.

7) Cincinnati Reds -- Gordon Beckham, SS
- The Reds really like Beckham and is his ability to swing the bat. He is in the midst of one of the best seasons in the career, a sign for the Reds and other teams that he is starting to mature.

8) Chicago White Sox -- Brett Wallace, 1B
- Wallace has really turned it on as of late and that should help his draft stock. He is a big guy with good raw power.

9) Washington Nationals -- Tanner Sheppers, RHP
- He has great raw ability and would really help the Nationals. He throws very hard and should be a candidate for the rotation within a couple years.

10) Houston Astros -- Kyle Skipworth, C
- The Astros would really like to add some good talent to their minor league system and it starts with the college guys. Skipworth would be a steal if he is still around and he probably wouldn't cost the Astros too much.

I would love to go down to fifteen and add a couple more guys that I think are right up there, but predicting ten already seems like too many. Let me know what you think, and if you are up for it, leave me your own prediction.

Hank Steinbrenner is getting on the nerves of several Front Office executives and players, according to a source close to the Yankees. This will likely lead to a major shake up this off season. Brian Cashman appears as good as gone.

Padres pitcher Mark Prior is heading back to Dr. James Andrews for another exam. It is possible he will need another surgery.