Share All sharing options for: The Morning Word: Cubs Need To Protect Arms 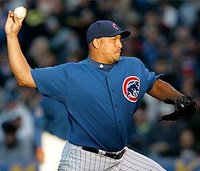 The Cubs have gained a reputation for over using their pitchers, going back to 2003 with Mark Prior and Kerry Wood. Although this may not be the case, the everyday fan believes it is. They back up their point with examples like top pitching prospect Angel Guzman, who missed most of last season and is expected to be out most of this one as well. This season, the Cubs are relying heavily on Carlos Zambrano and Ryan Dempster to anchor the rotation. Ted Lilly is doing his part as well, but Marquis is struggling and rookie Sean Gallagher has not proven to be consistent, yet.

Let's start with Carlos Zambrano, who is 7-1 with a 2.33 ERA in 81.0 innings of work. In his last start, he through 130 pitches in a game where he wasn't pitching like himself. He was wild, his release point was inconsistent, and the offense really wasn't there. In his start before that, he threw 109 pitches, so the Cubs really weren't thinking when they extended him like they did. Personally, I think they are pitching him to win the Cy Young, and not to help the Cubs. The Cubs bullpen has been very good in the later innings with Howry, Marmol, and Wood closing it out, and it would nice to see the Cubs show some faith in that tandem.

Ryan Dempster has been one of the biggest surprises this season, compiling a 6-2 record with a 2.56 ERA. Despite moving from the bullpen to the rotation, the Cubs really have not spent much time easing him in to the pitch counts. Over his last four starts, he has averaged 115 pitches over about seven innings each time out. Dempster has already pitched in more innings than he did last season, so the stress they are putting on his arm really could hurt them in the long run. Maybe I am being cautious, but I wouldn't be surprised to see the Cubs pitching crumble in September or October because of the excessive amount of stress put on their arms.

One good sign coming from this story is that Lou Piniella acknowledged the amount of pitches being thrown and said he plans to limit Zambrano in his next couple of starts. Hopefully, this does not come back to haunt the Cubs.