The Morning Word: Do Pitchers Pitch Better in the NL?

Share All sharing options for: The Morning Word: Do Pitchers Pitch Better in the NL? 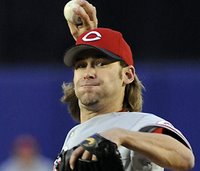 Fans have always been quick to jump the gun and say a pitcher will do better in a switch to the National League. That the eight batters you face do not stand a chance against the nine hitters you see in the AL. The National League has been made out to be a place for struggling pitchers to hide from the power hitting AL lineups and face the weaker NL lineups. In most cases this happens to be true, but now all. Some teams have paid big prices for assuming this would happen.

Between 2000 and 2005, twenty nine pitchers (with at least 20 starts) moved from the American Leage to the National League. Of the twenty-nine, average ERA's dropped nearly 85 points, from 4.79 to 3.94. While this does not always put wins in the win column, it does help the individual pitcher get their team closer to adding more wins. Changing leagues should not really affect ones ERA though, but history shows that it has made a big difference.

In the case of Bronson Arroyo, the move from the Red Sox to the Reds paid off big time. Although Arroyo put up the same win totals in 2004 with the Red Sox and 2005 with the Reds, his ERA dropped 1.22 points and we saw his strikeouts jump by 84 K's. He pitched in thirty-five more innings than the previous year, something that facing the bottom of the order attributes to.

A similar circumstance came about with Chris Young of the Padres. In his final year with Texas, he went 12-7 with a 4.26 ERA and 137 K. At first glance, this looks like a good year for a twenty-six year old pitcher in his first season. However, after joining the Padres in 2006 and seeing his ERA drop .80 points, you see that he is much better off in the National League. Not only that, but his strikeouts have increased from 137 to 164 in just one season. While this may be an example of maturity, facing the bottom of the order definitely tacks on a few each game. Opposing batting average also dropped 0.026 points, further supporting the notion that the NL is a safer place for pitchers.

That is not always the case though. When Barry Zito made the switch from the American League to the National League during the 2007 offseason, many thought he would be come the best pitcher in the National League. His 102-63 record with the Athletics made him one of the winningest pitchers in the American League since 2000. His ERA was only above 4.00 once, and he had a Cy Young under his belt as well. However, when he joined the Giants in 2007, he tied his career high in losses (14), set a new high in ERA (4.53), a set a new low in strikeouts since becoming an everyday starter (131). He is 0-7 to start the 2008 campaign with a 6.95 ERA and he hasn't shown any signs of turning it around.

Statistically, the numbers don't lie. Most pitchers fare better in the National League. I wouldn't rest my franchise in the hands of a pitcher switching leagues, but it is definitely something to take notice of if the situation presents itself.