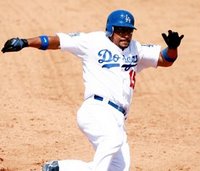 The fact that several executives and scouts are talking about Rafael Furcal suggests that almost every team in need of a shortstop has their on eye on him. Although Furcal is on the DL, he has hit .366 with 5 HR, 16 RBI, and 8 SB in 32 games this season. He is the best shortstop on the market this upcoming offseason and will make at least thirteen million dollars, his current salary this year. Furcal has averaged 14 homeruns from 2003 to 2006 and has hit for a .288 average. In 2007, he suffered from back problems and his numbers were affected by it. However, he is off to a good start this season and LA Times beat writer Tony Jackson believes he will be the X-factor for the Dodgers this year: "Rafael Furcal, he's the guy. He is now healthy, he is going to get on base, run, and allow other guys to drive him in."

The next best shortstop on the market is White Sox shortstop Orlando Cabrera. Not only is Cabrera three years older than Furcal, but his numbers since 2003 don't even come close.


Furcal's numbers speak for themselves, and will likely get better if he continues to play like he is. Furcal is going to be thirty-one, and will probably land a three or four year deal this off season. Here is a run down of the best possible options for Furcal if he does part ways with the Dodgers:

Cardinals: The Cardinals have Cesar Izturis at shortstop, batting .240 with 0 HR in 32 games. Although he is good with the glove, he does not have what it takes to be an everyday shortstop anymore. The Cardinals have SS Peter Kozma developing fast in the minors, but he won't be ready to play everyday for another three seasons, at least.

Yankees: The Yankees will decline Jason Giambi's 22 million dollar option this offseason, making him a free agent. That would open up a spot at 1st base. Derek Jeter, although he claims to be more explosive at short, has a position change in his future. He will most likely move to first, opening up the shortstop position. Why not move him next offseason and bring in Furcal, who could serve as a upgrade at the leadoff spot and at short.

Cubs: The Cubs are looking for a lefty (Furcal is a switch hitter) middle infielder to lead off for them. They had their eyes on Brian Roberts and Orlando Hudson, but Furcal seems like an obvious choice if they can't land either. The Cubs pursued Furcal back when he was a free agent back in 2005, and would love to have him as their starting shortstop and lead off hitter. Any signing, however, would move Theriot to second base and Mark DeRosa to a utility role.

Red Sox: If the Red Sox are able to dump Julio Lugo, Furcal would fit nicely there. A switch hitter, probably in the second spot, would open up a lot of opportunities for Manny Ramirez and David Ortiz to drive in runs. David Ortiz is a .302 hitter with runners on base while Ramirez is a .329 hitter. Furcal's consistent bat and speed at the top would help generate even more runs for this team, who are starting to face better competition within their division this season.

Indians: The Indians need to make a splash and that will most likely come in the form of a middle infielder. Garrett Atkins has been mentioned, but with Asdrubal Cabrera and Johnny Peralta hitting a combined .202 with 7 homeruns, they could try and add Furcal to fill in at one of the spots. The only problem with that is that Peralta is locked up till 2010 with an option for 2011.

The season is still early and a lot will change by seasons end. With Furcal seeing success in LA again and the team starting to show signs of life, he might be better off staying. However, the Dodgers have handed out several big contracts since handing him his back in 2005 that have not gone well for them (Jason Schmidt 3/45, Juan Pierre 5/44, Andruw Jones 2/36.2). Dodgers ownership might not be willing to give out another big contract, forcing them to go with prospect Chin-Lung Hu.