The Morning Word: What The Reds Need To Contend

Share All sharing options for: The Morning Word: What The Reds Need To Contend 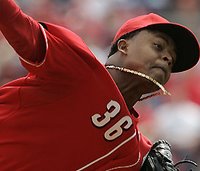 The Reds are beginning to show signs of life with three emerging young pitchers behind ace Aaron Harang. Johnny Cueto, Edinson Volquez, and Homer Bailey are all pitching well at their respective levels and will make a significant impact on the team in the years to come. Johnny Cueto turned heads in his first start, earning the nickname "Little Pedro" among Reds fans. Cueto’s fastball tops out at 97 mph with a devastating slurve and a deceptive changeup. He has the makings to pass up Harang as the ace of the rotation, and that is a lot to say considering he hasn’t even made ten major league starts.

While Cueto has everyone excited, the player that came over in the Josh Hamilton trade is actually pitching better. Edinson Volquez mixes a hard fastball with a slider and a fading changeup. He is beginning to show signs of maturity – something that gives scouts a reason to project fifteen wins for the 24-year old pitcher.

Former top prospect Homer Bailey did not have the best 2007 with the Reds, but it was a good learning experience, and that’s showing in Triple-A. He is 4-3 with a 2.72 ERA and a strikeout-to-walk ratio of 39/12. Pitchers coming out of high school need more time than pitchers from college to develop, usually, so I’m sure they will give him another month or so until he gets another call up. He has drawn comparisons to Josh Beckett with his ability to strike out batters with his hard fastball.

Here is what their rotation will look like in 2009:

When facing that rotation, you’ll have to face one potential number one starter each series. If only the offense could pick it up they’d be taken seriously in the division. They are currently tenth in the National League in average (.255), twelfth in runs batted in (144), and eleventh in hits (308). The outfield will likely look completely different next season, with prospect Jay Bruce highlighting the change. Adam Dunn and Ken Griffey will likely be traded, opening the spots up for free agents or other in-house options. Here is a look at the possible lineup:

Although Joey Votto and Edwin Encarnacion will likely anchor the offense, the Reds need an on-base guy at the top to get on base and generate some runs. Their regular lead off guy, Corey Patterson, is hitting just .200 with 4 HR. That isn’t going to cut it. Alex Gonzalez, who is currently on the DL, makes for a solid number two guy, but he hasn’t made a significant impact on the Reds since coming over from the Red Sox. The top shortstop available next offseason is Rafael Furcal, who is hitting .366 with 5 HR and 8 SB. He will likely be looking for more than the $13M he is getting paid now if he keeps it up, and that might not be out of the Reds’ price range, especially if they trade Griffey and Dunn.

The Reds are going to have to fight to compete with the Cubs, Brewers and Cardinals, but there is no doubt that their young pitching could put them in strong contention for the division for the next several years to come.

With Jason Isringhausen out as closer, the Cardinals are reportedly taking a look at both Huston Street and George Sherrill. One possible, less expensive option is Rockies pitcher Manny Corpas.

Shortstop Tim Beckham was rated the top draft prospect by Keith Law. Will the Rays bite? He looks like a better option for the Pirates.

Here is someone you should pick up if you haven’t already:

Randy Flores, Cardinals: Flores is 1-0 with a 2.08 ERA in 14 games and is moving into the closer spot. With the Cardinals still in first place, he should see plenty of save opportunities.