News and Notes: Griffey to Detroit?

Share All sharing options for: News and Notes: Griffey to Detroit? 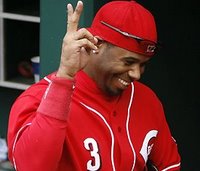 The Reds will likely shop Ken Griffey and Adam Dunn at the trade deadline in hopes of improving their team for the future, opening up speculation to where he could go. The Red Sox, Mariners, Cubs, and Tigers make the most sense and with the Tigers recent opening in the outfield, it makes sense they could bring him in for the final push into the playoffs. If the Reds continue to struggle and are in last or second to last at the deadline, the Tigers might not be forced to give up too much in order to land Griffey. Griffey could easily be slotted in right, left, or at DH --- giving them a powerful lefty in a very powerful lineup.

Meek to stay with Pirates?: The Pirates and Rays are talking a trade that would allow them to hold on to Evan Meek without keeping him on the major league roster. Meek shows potential, but should probably stay in Double or Triple-A this season.

Braves acquire Norton: The Braves acquired Greg Norton from the Mariners in exchange for a player to be named later and cash. Interesting move, but probably a non-issue this season.