Share All sharing options for: News and Notes: Rangers to Trade Blalock? 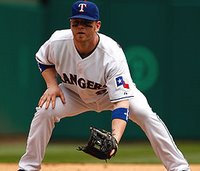 The Rangers are currently in third place with a record of 20-21. They are determined to rebuild with prospects through the draft and trades, and may explore that this upcoming trade deadline. Hank Blalock, who is in the final year of his contract, is batting .299 with 3 HR. He does have a club option worth 6.2 million dollars, so any team that goes out to acquire him would have him for at least one full season. Blalock is a two-time All-Star and is just twenty-seven. He hits for good power which should improve as he enters his prime (Average prime: 28-32). As for teams that could be interested, the Indians seem like a good fit. They are looking for a corner infielder and Blalock would certainly help in that role. The Astros have Ty Wigginton struggling at third base right now and may look to add Blalock to their lineup. Their minor league system isn't as strong, but they have enough to get a trade done. There will always be a surprise team that jumps in, but it is a little early to see. If Evan Longoria is struggling in July, maybe the Rays would make a move on Blalock. He would give them the push they need for the playoffs (actually!) and they could always hold on to him as insurance in 2009. They have minor leaguers that are expendable, and they are good enough for the Rangers to bite on.

Rockies will wait for Tavarez: The Red Sox are asking for pitcher Brandon Hynick in exchange for Tavarez, and the Rockies are not interested. They will most likely wait until he is released.

Marlins to sign Jones: Now that Jacque Jones is a free agent, the Marlins are expected to finalize a deal within the next day or so.

Edmonds to Cubs: The Cubs and Jim Edmonds have agreed to a one year deal, according to ESPN.com. The Cubs will send down Felix Pie and will send him to work with the coach that helped Ronny Cedeno develop his swing. Hopefully, that will make his ready for 2009.

Rays expected to draft Posey: Several executives are hearing that the Rays are leaning heavily towards drafted catcher Buster Bosey.

Mariners ready for Griffey: The Mariners have scouted him, talked about him, and have checked out his salary to make sure it fits the payroll. It does. It appears as if Griffey will be a Mariner.

Kawakami prefers Red Sox: Japanese phenom Kenshin Kawakami would rather sign with the Red Sox than the Yankees or Mets next season.