Share All sharing options for: Orioles To Trade Sherrill? 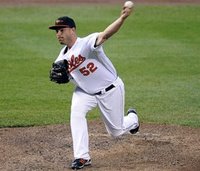 When the Orioles traded Erik Bedard, the supposed center piece of the deal was Mariners closer George Sherrill. However, it is becoming more apparent that Sherrill was acquired to only swing in a different deal this season and the younger pitchers they got were really the future of the team. Sherrill is currently 1-0 with a 3.43 ERA and 17 SV, and would likely net several prospects in a trade. Several teams need a closer right now and could trade for him at the deadline. The Rockies could trade for Sherrill and move Fuentes to a set up role, knowing that he will likely leave via free agency this off season. The Rockies have several solid prospects and the Orioles and Rockies are on pretty good terms when it comes to making a trade. The Cardinals currently do not have a closer and could trade for Sherrill, but it could cost them a top prospect or two. Sherrill is very cheap and very good, so it might be worth it for the Cardinals.

Other options, although less likely at this point, include the Brewers, Padres, Angels, Indians, and Braves.