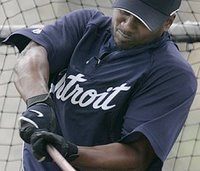 The Tigers only gave Jacque Jones twenty-four games to prove he could hit, but he got off to a slow start. Jones is a career .278 hitter and has the potential to hit 20 homeruns, but will likely fall somewhere between 10-15 this season. Jones is in the final year of his three year, sixteen million dollar deal, so the Tigers probably don't want him in their minors. They will probably look to make a trade, or give him his release.