Uggla Will Likely Be Traded

Share All sharing options for: Uggla Will Likely Be Traded 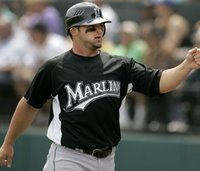 Marlins second baseman Dan Uggla is proving to Marlins executives that last season was an adjustment period and that he has the potential to be an All-Star. He is currently batting .316 with 13 HR in 42 games and is just 28. The Marlins could give him a deal similar to Joe Mauer, who signed a four year deal worth 33 million dollars in 2007. That seems pricey for the Marlins payroll, but they could adjust his annual salary to work it into their payroll. However, there are several other players on the Marlins who will need extensions that could force the Marlins to make a tough decision. There are several teams in need of a second baseman though that would be willing to part with several top prospects to acquire Uggla, making him the obvious choice to go.

The Rockies seem like the perfect fit. Jayson Nix struggled at the MLB level and bringing in Uggla would definitely help their offense. The Marlins could probably use a couple of their solid pitching prospects, maybe Brandon Hynick or Franklin Morales. If the Rockies were interested in signing Garrett Atkins long term, they could trade Ian Stewart as well. Another option for Uggla is the Dodgers, who will have an opening next season when Jeff Kent departs. The Dodgers do have other in house options and will have to sign Furcal first, but it is a possibility. The Indians seem very serious about getting offensive help and have the prospects that could suit the Indians. They probably do not want to part with a top pitching prospect with Sabathia unsigned, but I wouldn't put it past GM Mark Shapiro to sneak in and make a deal.