What Is Pedroia Worth?

Share All sharing options for: What Is Pedroia Worth? 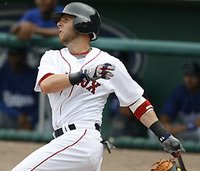 Red Sox second baseman Dustin Pedroia is currently getting paid 575,000 dollars and is in for a big pay day. After breaking out in 2007 and proving in 2008 that it was not a fluke, it is unclear whether he has a long term deal in his future. He is hitting .307 with 2 HR in 46 games, but his defense shoots his value up even more. Pedroia will be twenty-five in August, and a four or five year does make sense. However, he is not a huge force in the lineup and does play second base, a position that is easy to fill on the field. Jose Lopez of the Mariners received a four year deal worth 6.07 million dollars, but Pedroia is definitely better and more proven than Lopez.

A four year deal worth between 13-14 million dollars seems reasonable, considering Pedroia has not been in the league for two full seasons yet. It has not gotten to Pedroia yet, but several teams are starting to lock up young players which brings into question when the Red Sox will do so with Pedroia.