Where Will Cashman Go?

Share All sharing options for: Where Will Cashman Go? 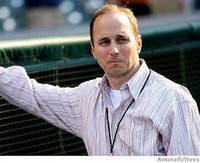 Brian Cashman admitted to reporters that the Phillies job interested him, likely meaning that he will leave the Yankees next season when his contract is up. This is just speculation, but the way Hank and Hal Steinbrenner are acting in just their first year will likely put one of the smartest General Managers in baseball away.

Here are a couple possible destinations for him:

Phillies: Phillies GM Pat Gillick is retiring in the fall making the Phillies GM job open. Although Ruben Amaro Jr. is the likely candidate, Cashman would be hard to pass up on.

Dodgers: If the Dodgers fail to put up a respectable record, the Dodgers could fire Ned Colletti and bring in Brian Cashman. Cashman would be joining a organization that would focus more on development than free agent signings, something Cashman is very familiar with.

Mets: This would be a surprising move, but if the Mets don't make the playoffs they could fire Minaya, Randolph, and everyone in the staff. This might be ideal for Cashman because he could remain close to his family.

Cubs: The impending sale of the Cubs could lead to Jim Hendry's firing. However, he has given this team a lot of depth and put them back in playoff contention.

Let's get to possible candidates with the Yankees if Brian Cashman does leave:

Ruben Amaro, Phillies: Amaro has been very loyal to the Phillies over the past couple years. If he gets passed up on for Cashman, he looks like an ideal candidate for the Yankees.

Peter Woodfork, Diamondbacks: A product of Josh Byrnes, who has built a successful team from nothing, makes sense for the Yankees. He is young, smart, and has already interviewed for several GM jobs.

Jed Hoyer, Red Sox: Although unlikely, Jed Hoyer is one of the best adviser's in baseball. He is familiar with the league, he is very smart, and is young. He could hold the job for awhile.

Jean Afterman, Yankees: She is an assistant GM to Brian Cashman, and giving her the job would make for an easy transition in the Yankees Front Office.