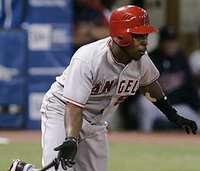 The White Sox have expressed interested in Angels infielder Chone Figgins for nearly a year. His speed, consistency, and above average fielding makes him a desirable lead off man for the Sox. Crede is hitting .275 with 8 HR in 42 games this season, and it is likely they will trade him if he continues to hit well by the trade deadline. The Giants remain interested in acquiring Crede, but the Brewers have shown some interest as well. According to the Chicago Sun-Times, the Angels are interested in signing free agent to be Joe Crede this coming off season and moving Brandon Wood back to his original position at shortstop.

This would not be a problem if Josh Fields was doing well at Triple-A, but he is hitting just .240 with 4 HR. If the White Sox packaged a pair of prospects with a reliever, they might be able to land Figgins for an infield role. Figgins is hitting .306 with 0 HR in 32 games this season, but has an OBP of .421. The White Sox will continue to build up Crede's value to the deadline, but do not be surprised if either player is traded following the All-Star Game.