Share All sharing options for: Will Rockies Host Fire Sale? 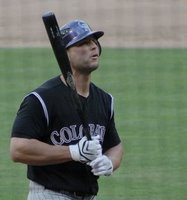 The Rockies have several players closing in on free agency that would draw considerable interest on the market. Several journalists are already calling Matt Holliday the 'Mark Teixeira' of this years trade deadline. Holliday is a free agent after the 2009 season and with Boras as his agent, it is unlikely that they would negotiate during the season to keep him there. There are several teams with deep farm systems that could use a power hitter like Holliday, but might not be willing to surrender the prospects the Rockies will be looking for. The Rockies are going to be looking for top of the line prospects while the team acquiring him will only want to surrender mid to low level prospects. This is because Holliday's road numbers are so slanted. Holliday is a career .364 hitter at home with 73 HR while hitting .274 with 36 HR on the road. A team acquiring him might not want to pay him 100 million dollars to a player if he is only going to hit around .280 with 20 HR.

As for teams that could be interested, the Yankees seem like a good fit. They need a middle of the lineup type of hitter and bringing him in would allow them to shop one of their aging outfielders. I doubt the Red Sox would try to respond and fight the Yankees for him, but if they are not interested in brining Manny Ramirez back, Holliday would be a good option in left field. The Cardinals need a hitter to protect Albert Pujols in the lineup and Holliday would definitely do that job. Not to mention that he would be a big upgrade over Chris Duncan in left field. It could cost them several prospects, but it would be worth it for the Cardinals.

Rockies closer Brian Fuentes is off to a good year and will probably also be traded by the Rockies before he becomes a free agent. One possible option for him is the Cardinals because they need a closer with Jason Isringhausen unable to find his groove. Packaging him and Holliday makes a lot of sense.