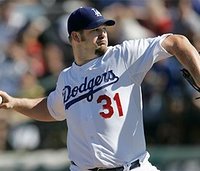 According to Ken Rosenthal, the Dodgers may shop Brad Penny at the deadline rather than exercise his 8.75 million dollar option. He is 5-6 with a 5.66 ERA in twelve games this season, losing in his last four decisions. Penny is an above average pitcher in the later months of the season, so he is definitely an option for a team like the Phillies, who could be fighting for the playoffs. The Dodgers need pitching help along with middle infield help, and the Phillies are good for both of those. If they were able to snag 2B Adrian Cardenas, who is blocked by both Chase Utley and Jimmy Rollins, it would be huge for them in the upcoming years.

Shortstop Chin-Lung Hu is struggling and Luis Maza is still getting his feet wet, but both are good prospects who should turn it around after adjustments are made. Jeff Kent is likely gone next season and bringing in Cardenas would be great for this Dodger lineup. The Dodgers do have a lot of raw infield talent, which might lead to a Rafael Furcal trade, assuming he can come back with enough time to prove himself before the deadline. A long term deal seems unlikely after he has missed about a month with chronic back problems.