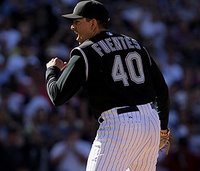 Rockies closer Brian Fuentes has been linked to the Yankees before, but the Yankees might finally be interested in getting something done. Assuming Joba Chamberlain can make a successful transition into the rotation, the Yankees will need a new set up man to set up for Mariano Rivera. LaTroy Hawkins has been inconsistent in the pen and there really isn't anyone that can step into the role. Edwar Ramirez is doing a great job right now compiling a 0.56 ERA in 14 games, so he is an option, but he has been working more as a long reliever as of late.

Fuentes is making 5.05 million this season and will be a free agent after the season. He is a trade candidate even if the Yankees don't work out, but they make the most sense. The Rockies might be able to land a solid prospect or two, maybe Dellin Betances, along with one or two more. The Yankees are 6.5 games out of first but that could change with the addition to Chamberlain in the rotation. Not to mention adding one of the best relievers to the setup for the best closer in the game.