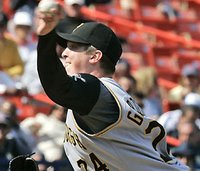 Pirates pitcher Tom Gorzelanny is off to a slow start, going 4-5 with a 7.38 ERA. This has caused new GM Neal Huntington to threaten a demotion if he does not turn it around: "We have to figure out the best course of action to get him back to his potential ... Whether we can do that at the major league level -- we've got an enhanced program that we've already begun -- or that does take going to Indianapolis ... I'd say we're still a ways away from that, but the reality is that we have to help Tom Gorzelanny." Gorzelanny has lost a lot of zip on his fastball, and it has hurt his other pitches as well. This has caused him to give up more hits, leading to more runs given up. If he was playing on a team with more run support, maybe he would be doing better, but playing with the Pirates is somewhat hurting him.

The main problem with Gorzelanny goes back to last year. Gorzelanny had career highs in innings pitched and games played since his professional career began in 2003. You could tell he was fatigued by the end of the season going 1-3 with a 5.77 ERA, but still pitched in 34.1 innings in six games. This has put more stress on his shoulder and it is showing. The Pirates would be smart to send him to Triple-A to work on his pitches and his arm strength. The season is all but lost for the Pirates as it is, so they should do whatever they can to preserve their ace.